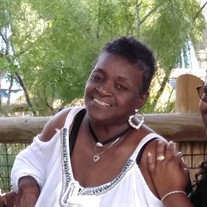 Born, Althea Diane Reed, age 66, on December 26, 1951 to Deacon Artist Ratliff and Mother Ocie Reed, in Kansas City, Missouri, where she also resided throughout her life. Deacon Ratliff was a devoted member of Evangelist Temple and Mother Ocie was a devoted member of Gethsemane Church of God in Christ. Althea is preceded in death by her parents; her brothers, John Reed and Robert Reed; her brother-in-law, Melvin Fellows and her sister-in-law, Patty Baker. Although born Althea, we knew her as “Diane”, The Matriarch to the family. Diane was educated in the Kansas City School District. D. A. Holmes for K-3 rd grades, Sanford B. Ladd for 4th-6 th grades; later attending Central High School. Diane continued her education at Vatterott College, where she graduated as a Geriatric Nurse; working full time; employed with Swope Ridge Geriatric Center and Two Rivers Psychiatric Hospital, providing exceptional service as a Lead Nursing Assistant; training all levels of new nurses and was called to assist with the nurses and doctors for ultimate care. She continued at Two Rivers until she later retired.  Diane had many people who loved her; she knew no stranger. Her love for people was without judgment, full of compassion. She was your voice when you were afraid to speak; your fist when you had to fight. Diane was intelligent, smart and wise. She was born with many talents, one being the most popular, dancing… Diane received her wings and dancing shoes made for the streets of gold on August 28, 2021. Diane leaves to cherish her memories: her dearest love, her best friend, her partner, her beloved husband, of 35 years, Andrew “Duke” Washington, of the home. There was no Diane without Duke, no Duke without Diane. They were inseparable; two of a kind. They were well known for their “Bonnie and Clyde” love for each other and their spectacular dancing…bringing the life to every party.  Diane also leaves her cherished memories: her children: Lamar Reed (Ornelia) and LaVanua (Reed) Gammage (James); her grandchildren: Dominique Reed, Nah Ryan Reed-Crawford, Kaleb Peoples, Kiana Gant and Eryn Perkins; great grandchildren: Harliegh Reed, Kason Logan and Kimoni Gant; brothers: Ray Reed (Veronica), Anthony Reed (Karen), Tyrone Reed and Dion Ratliff (Shella (Ross); sisters: Joann Fellows, Joyce Reese (Duane) and Carole Williams (James), several nieces and nephews and other loving family and friends.

The family of Althea Diane Reed created this Life Tributes page to make it easy to share your memories.

Send flowers to the Reed family.