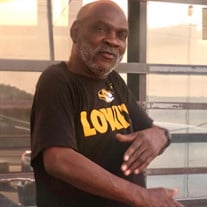 Homegoing Celebration of Andrew A. Washington 08/31/1959-01/06/2022 Mr. Andrew Anthony Washington, 62, affectionately known as “Duke”, was born August 31, 1959 to the union of Willie and Emma (King) Washington in Kansas City, MO. Both parents, his wife, Althea and four brothers preceded him in death. Duke was born and raised in Kansas City, MO, where he attended Paseo High School. He worked at Eastside Animal Hospital. He was also an entrepreneurial handyman, helping any and every one that needed his help, with no complaints. Duke was the “King of BBQ”, feeding hundreds and thousands of people. He had a fun-loving spirit; he just loved to have fun; he was always cracking jokes and making people laugh, but he had no problem telling you, “like it is”.  Duke leaves to cherish his memory: his sons, Antwoine Washington and Joshua Pryor and daughter, Travett Hergins; his step-children, Lamar Reed & LaVanua Gammage;12 grandchildren; 9 great grandchildren; his sister, Augustine Burns; his brothers: Raymond Ward and Dennis Washington (Kim); sister-in-law, Lillian Washington; step-sisters: Freda Davis and Tanya Conway; step-brothers: William Conway (Lucille), Ernest Conway, Sr. (Freddie), and Fredrick Conway; a host of nieces, nephews and cousins, including his best buddy and cousin, Penny and other loving family and friends.

The family of Andrew Anthony Washington created this Life Tributes page to make it easy to share your memories.

Send flowers to the Washington family.