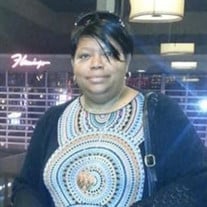 Angela Hunter-Cole passed on January 10, 2021. She was born Angela Maria Hunter in Kansas City, Missouri to William Earl Hunter and Inell Hunter. Angela was the youngest of two children. Her dad, William E. Hunter preceded her in death. She leaves her husband, Odies Cole Jr., her mother Mrs. Inell Hunter, her sister Debra Anne Davis (Hunter), Cousin Shirl Page, a host of family, special friends and her side-kick Daizee’. Angela attended Bishop Hogan High School and later received her Bachelor of Science in Health Administration. She also studied Biology/Pre-Med at Hampton University. Angela enjoyed her work experience at a variety of hospitals including Children’s Mercy, St. Luke’s Plaza, Veteran’s Administration Medical Center and a Children’s Hospital in Norfolk, Virginia. Angela moved to Norfolk, Virginia in 1993 and returned to Kansas City, MO in 1997. She enjoyed living near the beach and becoming a Virginia girl with all of her mom’s Virginia family members. Angela met Odies Cole, Jr. at age 15 and they married June 16, 2002. They resided in Kansas City, Missouri. Angela was a member of Greater Pentecostal Temple Church of Kansas City, Kansas where she adored to worship. She supported her church family and recently enjoyed attending parking lot service. Angela was faithful in her belief of God, his love for her and continued to praise him for all of her days. She served as the secretary of Ride or Die Motorcycle Club. She was a member of the Eastern Star, Queen of Sheba Chapter of Kansas City, Missouri. She served on the former Lupus Board of Kansas City, Missouri. Angela loved to travel and her favorite place to be was Las Vegas. She loved to visit the casinos, enjoyed the restaurants, shopping and anything Vegas offered. She adored hanging with her ‘girls’ in Kansas City, Atlanta, Las Vegas, Fort Smith, Arkansas and Norfolk, Virginia. Her restaurant buddies were everything to her and the traditional birthday celebrations are epic. She enjoyed Thrift Shopping with her Mom (best friend) for hours into days. Her car was a haven for any natural disaster. We all joked that locating her and ‘Titus’ in a world- ending event will provide many days of survival. Angela would share whatever she had and would give you her last penny. She adored her animal babies and would have saved each stray dog on her routes if there was room to spare. Bell was the love of her life until she expired and Daizee’ (Belle’s baby) moved into the role up to Angela’s homegoing. Angela was an amazing Auntie to all of her nieces and nephews, cousins and friends children around the world and loved taking care of, playing with, primping, dancing with, and spoiling them all. She also loved to whip up some delicious home cooked meals. She loved clothes and housed more shoes than any department store could stock. She liked her soulful music with Sade and Frankie Beverly & Maze concerts on her agenda. The Pittsburg Steelers were her football team. Angela absolutely adored her nephew Myles Hunter Davis for whom she would move the earth for. She attended every sport event, soul circus, Disney on Ice, Cotillion event that she could and lived a faithful member of the BSSA Bears, BSSHS JAG Fan Clubs to support Myles. He was her heartbeat and she was his. Their Auntee / Nephew bond will be branded in their souls, forever. Please know that Angela was an Amazing, sweet, intelligent, real, funny, giving, loving, cooking, spirited, stylish individual who lived her best life until her body failed. God fixed her health issues instantly, peacefully, and lovingly brought her home. She loved her husband, family, friends, strangers, and anyone who crossed her path. As you think about Angela remember the times you laughed, the times you cried, the experiences you had and the love you shared. Surely, we will miss her. Look to the sky as she smiles at you, Our Angela is at her ultimate Peace!

Angela Hunter-Cole passed on January 10, 2021. She was born Angela Maria Hunter in Kansas City, Missouri to William Earl Hunter and Inell Hunter. Angela was the youngest of two children. Her dad, William E. Hunter preceded her in death. She... View Obituary & Service Information

The family of Mrs Angela Hunter-Cole created this Life Tributes page to make it easy to share your memories.

Send flowers to the Hunter-Cole family.