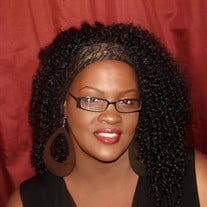 Antoinette LaToi Boswell, age 58, of Raymore, Missouri, was born December 29, 1963 in Kansas City, Kansas, to the union of Frank Russell and Shirley (Weekly) Boswell. Saved at an early age, Antoinette was baptized in Jesus’ name at Christ Temple Pentecostal Church as a child.  She became a member of Bethel Pentecostal Church where she received the baptism of the Holy Ghost in December 1992 under the leadership of Elder Reuben K. Johnson.   “Toi”, as she was known to all, was a devoted mother and grandmother who loved being connected with her family.  She would often talk about how her family connection reminded her of how the Redwood trees are interconnected at the roots.  She spoke passionately about how these trees grew strong and tall because their roots are connected.  Toi was a God-Chaser, a constant student of the word, and a worshipper who did everything to the best of her ability.  Those who knew her knew she would go above and beyond in anything she did for them.  A very creative person, she enjoyed interior design (self-taught), writing (a craftsman of words), and family vacations.  Her laugh was infectious, her skin beautiful and youthful, and her smile literally lit up a room. Toi now joins in eternity: her parents, Frank and Shirley Boswell; her sister, Roxann Williams; a brother, Tyrance Dangerfield; her son, Ricky Boswell; her nephew, Michael Williams; and a host of other loved ones. Toi will be greatly missed by: her children: Damion Boswell, Donisha Gordon (Zelverick), LaToya Fisher (Andrew) and Chasi Sipple; grandchildren, Dorion Boswell, Simone Boswell, Prophet Boswell, Justin Roland, Josiah Roland, Justice Roland, Scott Boswell Jr., Ayya Boswell, Aidin-Ozias Boswell, Isabella & Annalise Gordon, Lailah Estis, Nickolai & Cree Bell; two brothers, Frank Boswell, Jr., and Torrence Hightower; nephews: Scott Boswell, Calvin Boswell, and Wardell Williams; stepmother, Margaret Pender; step-brother, Samuel “Butchy” Davis; step-sisters, Stacie Simpson (Lee) and Tracie Davis; and her best friend, Denise Johnson. Toi also leaves a host of bonus grandchildren, great-grandchildren, uncles, aunts, nephews, nieces, cousins, friends and saints.

The family of Antoinette Latoi Boswell created this Life Tributes page to make it easy to share your memories.

Send flowers to the Boswell family.