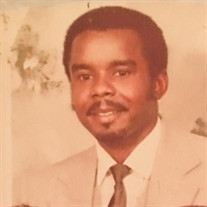 Boda Lee Alexander Jr. Boda Lee Alexander, Jr. 73, entered his earthly home August 5, 1948. Boda Lee Alexander, Jr. departed his earthly home for his Heavenly Home January 14, 2022 at 9:37pm. Boda Alexander, Jr. was born in Elberton, Georgia to Boda Lee Alexander, Sr. and Lue Ella (Cade) Alexander. Boda Lee Alexander attended Blackwell Elementary and graduated from Blackwell Memorial High School. After graduation, at the age of 19, Boda Lee Alexander, Jr. joined the United States Army. He proudly served in the Vietnam War. His bravery, courage and wise decision-making made it possible for many American soldiers to make it back home. After leaving the army with an Honorable Discharge, Boda worked in the granite industry in Elberton, Georgia. He started with mining granite in the quarry and then elevated to having his own business selling & designing granite cemetery headstones. He designed his Mother's Lue Ella's beautiful headstone, which he took great pride in. Boda Alexander, Jr. made Kansas City, Missouri his home in 1989, after becoming disabled in a serious automobile accident. Boda loved Kansas City, but was proud to be a "southern boy" as he called himself. Boda loved southern soul food & good soul music. His favorite artists were Otis Redding and James Brown. He had a pretty great voice and said if he could do it all over, he would want to be a soul singer. Boda loved talking with his very close nephews about the good old days in Georgia. The joy those conversations brought him were priceless. Boda adored spending time with his grandchildren: Brielle Taylor and Angelo Walker. Boda was and still is, an amazing grandfather. He loved ALL his grandchildren but due to distance and his immobility, he didn't get to see them often. He would look at photos of his children, grandchildren & great-grandchildren every day and say how much he missed them. Even through Boda's many health challenges, he was always concerned about and tried to protect his loved ones. He is the true definition of selfless. He was and still is, an AMAZING Father. He was a great provider for his family. He made sure his children would have a family home to return to if they were ever in need. Boda was a one-of-a-kind man. A true southern gentleman. Boda also loved building things like tool sheds & picnic tables. He was very handy and good with his hands as well. My Daddy could do and build almost anything. He worked in construction briefly before becoming disabled. The family takes comfort that Boda Lee Alexander, Jr. did everything he came to do on earth. Job Well Done Daddy! At Ease Soldier. Boda Lee Alexander, Jr. was preceded in death by his Father Boda Lee Alexander Sr, and Mother Lue Ella (Cade) Alexander; his daughter, Cassandra; his baby son, Quincy Alexander; his brother Joseph “Joe” Alexander, Sr., his brother Arthur Alexander, Sr.; his sister, Imogene Alexander; his sister Nellie Alexander; his nephew Brian Alexander; his niece, Lois Switzer and his great nephews, William Switzer and Tre. Boda Lee Alexander, Jr. leaves to cherish his memory: his wife, Pearlie Carter Alexander; his oldest son Teryl Alexander of Sarasota Florida, his son Timothy Alexander (Tonya) of Bradenton Florida, his daughter, Katina “Tink” Alexander of Ruskin Florida, his daughter Penny Carter Alexander of Kansas City Mo, and his baby daughter, Allison 'Al' Carter Alexander of Kansas City MO and his sister, Melvee Clark. Boda Lee Alexander, Jr. was blessed with 17 grandchildren: Latiria, Rashad, Malek, Maliyah, Deon, Akili, Jaelan, Aniya, Terricka, Jasmine, Symphony, Vanessa, Kaithlyn, Ciara, Jaden, Brielle and Angelo. Boda Lee was also blessed with 11 great grandchildren. Boda also leaves to help represent and cherish his memory, his beloved nephews, Joseph 'Joe Alexander Jr. (Kim), Vidal 'Dale' Alexander, Arthur 'Mikey' Alexander Jr, James 'Rickey' Alexander (Angeanette), James 'Pluto' Alexander, Brandon Miller and Cory Clark. Nieces Brenda, Jean, Alexis, Sheryl, Gwen, Angela, Lynette, Tammy, Ciera, Kimberly; his sister-in-Laws, Norma Fortson and Everlena. He also leaves his father-in-law, Dallas Fortson and a host of family and friends all across Georgia, Florida, Texas and Missouri. Boda loved and was loved by many people. Thanks to everyone who will cherish his memory

The family of Boda Lee Alexander Jr. created this Life Tributes page to make it easy to share your memories.

Send flowers to the Alexander family.