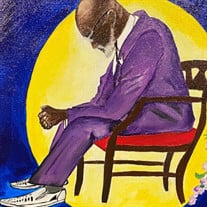 Life’s Reflections Burton La Vance Rogers, age 64, was born on May 10, 1957, in Kansas City, Missouri to James and Johneitta (Sayles) Rogers. He was preceded in death by his mother; his sons, Burton Rogers, Jr. and Samuel Rogers; grandmothers, Elise Rogers and Etna Thompson and grandfather, Watt Dickson. Burton attended Lillis High School where he received his High School diploma. After graduating, he joined the United States Navy where he served and received an Honorable Discharge. Burton was loved by everyone. He brought laughter and jokes to any situation; “cutting monkeyshine”... He loved to talk, spend time with family, listening to and playing music, fishing and serving The Lord. His favorite moment was learning to be still and knowing that God was in control. He truly enjoyed spending time with his grandchildren, whatever that may have been; fishing or playing music together. Burton worked at Ford Motor Company for 15 years, he worked as a security guard and was also a Behavior Interventionist at Frontier School of Excellence in Kansas City. He was a member of the Masonic Lodge. Burton professed his faith at an early age. He was called to preach at Hosanna Missionary Baptist Church in 1988. Burton joined First Baptist Church in Brunswick, Missouri in 2019 and became Associate Minister June 20, 2021. Burton was called home on October 10, 2021. Burton leaves to cherish his memory: his wife of 32 years, Vivian Rogers; daughter, Shaneika Shipley (Michael); son, Burton Rogers II (Alyssa), all of Kansas City, Missouri; three grandchildren: Aaron Wright, Maya Rogers, and Jasmine Rogers; his father, James Rogers of Tulsa Oklahoma; sister, Shekina Russel of Tulsa Oklahoma; brother, Terrance Williams of Kansas City, Missouri; a host of uncles, aunts, nieces, nephews, cousins and other loving family and friends.

Life&#8217;s Reflections Burton La Vance Rogers, age 64, was born on May 10, 1957, in Kansas City, Missouri to James and Johneitta (Sayles) Rogers. He was preceded in death by his mother; his sons, Burton Rogers, Jr. and Samuel Rogers; grandmothers,... View Obituary & Service Information

The family of Burton LaVance Rogers created this Life Tributes page to make it easy to share your memories.

Send flowers to the Rogers family.