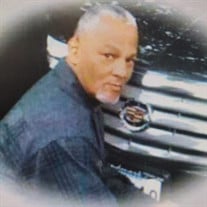 Charles Edward Hill, Jr. III, 61, was born June 28, 1960 Charles Hill Jr and Delorse Marie Simmons in Kansas City Missouri. Charles departed this life on October 20, 2021. He is preceded in death by both his parents, his grandparents Charles and Ruth Hill, Sr, one brother, Tyrone Morris and one sister, Deborah Simmons. Charles was educated in the Kansas City Missouri School District. As an adult he worked under his uncle Kenneth Hill for Unique Window Cleaning and was also employed as a chef for Charlie D's, Mad Jack's, Peachtree Restaurant and a personal chef for the Kansas City Chiefs; not to forget an awesome landscaper. He would have your yard just beautiful! Charles loved his family to the fullest and would help any of them; all who asked. Charles had a heart of gold and would give you the clothes off his back with no problem. Left to cherish Charles’ memory: his wife of 26 years, Stella Hill; his son, Brian Mondaine and stepson, Nicholas Cunningham (Tina); two stepdaughters, Stephanie Cunningham and Tiffany Cunningham (Hasaun); eight grandchildren and one great grandchild; six sisters: Marsha Simmons, Denise Black, Charlesetta Lockett, Demita Hill-Taylor, Ericka Hill and Nicole Hill; five brothers: Marvin Sanders (Toni), Dennis Lewis, Kevin Hill, Landon Canady (Tenesha), and Eric Hill; special aunts, Anna Williams and Patricia Hill whom he was very fond of and called her “mother”, as well as his aunts: Laverne Hill and Marilee Hill; two uncles: Willie Hill (Delorse) and Henry Hill (Cecil); a cousin/sister, Patrice Cadenhead; his cousin/brothers: Tracy Harlin, Kendrick Cook; and Cornell Dudley, his devoted brother from another mother. Also left to cherish is a host of nieces, nephews, cousins, other relatives and friends.

The family of Charles Edward Hill Jr. III created this Life Tributes page to make it easy to share your memories.

Send flowers to the Hill family.