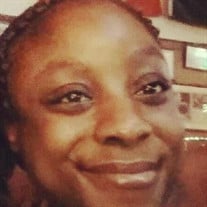 Constance Elaine Murphy, affectionately known as "Little C", was born September 29, 1982 in Kansas City, Missouri to Connie Elaine Lovelady and Timothy E. Murphy. Our Heavenly Father called Constance home on May 4, 2021 at Truman Medical Center in Kansas City, Missouri. Constance was always in a fight, something a lot of us never knew by the way she carried herself. Having Sickle Cell Anemia was her lifelong fight; causing Constance a great amount of constant pain. We were blessed to have Constance as long as we did as we were told that she would not make it past 21, but that was not the doctors call to put an age or a number on her life. Constance fought long and hard and made it to age 38. Constance was a lifelong area resident and was educated in the Kansas City Missouri Public School District. Constance could not walk along with her graduating class due to her illness, but she later graduated in 2002 from De La Salle in Kansas City, Missouri. Constance was heartbroken when the love of her life DeJaun Gordon lost his life. Constance and DeJaun shared many years together; although they did not have any children, Constance was blessed with a bonus, DeJuan's daughter, Taysha Taylor, to whom Constance loved and cared for her deeply. To all who knew and loved Constance can now say she's at peace and has no more pain. She is at peace and has no more pain. She's in safe hands back united with the love of her life DeJaun. Also preceding her in death, her cousins: Lance Lee Lovelady, Luzerit Lovelady, Jr. and Maurice Long, who loved her like she was his daughter. Constance leaves to cherish her memory: her mother, Connie Elaine Lovelady, her father, Timothy E. Murphy; Paternal Grandmothers: Eula Lewis (Clinton) and Brenda Murphy; Paternal Grandfather, Cornell Emory (Jean); brothers: Rondell Murphy and Timothy Murphy, Jr.; aunts: Treona Murphy, LaConda Murphy, Carlisa Emory, Davila Nelson and Nickole Lovelady-Nelson; uncles: Eric Murphy, Luzerit Lovelady, Sr., Ian Nelson, Robert Nelson and James Nelson; cousins: Nicholas Council, NaTasha Nelson, Aniya Franklin, Nicholas "Nappie Nap" Council, Nickiyah Council, Mahogany Walton, Nikko Council; a special shout out to: Kevin Byers, Michelle Gordon, Zoila Almaguer, DeAsia Gordon, DeJaun Byrd, Daryl Gordon (Verna), Keisha Nelson, Dashia Nelson, Ivan Rozell, Traci Stewart, Jamiyah Anderson, Jessica Stewart, Deion Parks, Domnick Thomas, Jada Stewart, Raven Jones, Ivan Rozell, Jr., Cameron Howard and a host of other loving family and friends. "We love you Little C!" "Rest easy lady!"

The family of Constance Elaine Murphy created this Life Tributes page to make it easy to share your memories.

Send flowers to the Murphy family.