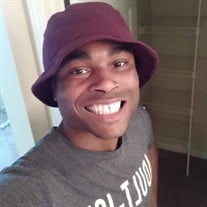 DeAngelo Jordan Wallace-Obituary DeAngelo Jordan Wallace was born on September 30th , 1992, in Kansas City, Missouri. To his parents Karen Wallace and Cino. DeAngelo was preceded in death by his two grandfather’s Donald Martin and Alfred Griffin, and his nephew DeAun Smith Jr. DeAngelo attended Job Corps where he graduated in 2012. De Angelo worked at Great Wolf Lodge in KCKS. He worked there as a Housekeeper. Everyone there admired his beautiful spirit. DeAngelo was a hard worker, and never complained when asked to do odd tasks around his job. DeAngelo was very kind and selfless. He cared deeply for his family. He would help anyone he could. He enjoyed singing and dancing. And his laugh will be remembered forever. DeAngelo had close ties with the LGBTQIA community. He was funny, had an upbeat soul, and lighting up a room with his smile and personality. DeAngelo always told his family, how much he loved them. His was also encouraging his family and friends to keep going and stay strong! DeAngelo was featured on the TV show the X-Factor in 2012. His debut was So iconic, that he went viral! He was a good singer and loved Beyonce, Mariah Carey, and Jennifer Hudson. DeAngelo also created his own music. DeAngelo Jordan departed this life on Monday, July 5 th , 2021. DeAngelo will be missed by parents Karen and Cino, his siblings: Taevion Harris, RJ Bartlett, Shauntice Wallace, Shauna Wallace, Devon Clemons, Charles Wallace, and Natrisha Wallace. Nieces and Nephews: Terrion Wallace, DaMya Smith, Kylie Darrell, Damario Wallace. Aunts and Uncles: Lamar Wallace, LaTony Wallace, Terry Wallace, Teressa Ryan, Carlis Wallace, Bobby Wallace, and Jesse Seamster. His grandmother Sharon ACosta, a special cousin Terry Adams, and a host of family and friends.

The family of DeAngelo Jordan Wallace created this Life Tributes page to make it easy to share your memories.

Send flowers to the Wallace family.