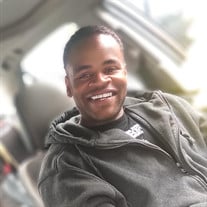 Mr. Dennis O’Keith Hyman, affectionately known as “King”, age 40, was born May 23, 1981 to the union of Charles R. Hyman Sr. And Richelle Johnson. He was educated in the Kansas City Kansas School District and received his GED, he later attended welding school and to further his education, King was proud to attend the Aviation Institute of Maintenance, Kansas City, Missouri.  He worked various jobs until he landed a position with Smithfield Foods in Tiffany Springs, Missouri.    On August 10, 2014, King made a visit to the library, upon returning to his car, King found a note on his car with a mysterious name and phone number on it, not knowing that the person who left the letter would end up being the love of his life, Marshonna Paris Hyman, affectionately known as “Sug”. July 2, 2019 King and Sug was united in holy matrimony. Sug was blessed to share the responsibility of loving and supporting King’s 3 children and although they had no children together, they had a special dog named Soo-Woo whom they loved very much. King told Sug that once Soo-Woo turned 6 months he was going to dye all the hair on Soo-Woo’s body red.  King took great interest in his health; he was very active and would always speak on the importance of exercising and eating right. He loved sports, jazz, reading, fishing and most of all being a mentor and positive example to other young men who came from a similar background such as himself. King loved helping others when he could, he was an all-around family man, his children meant the world to him and he loved them dearly. King found great joy and loved spending time with his sweetheart, Sug. You wouldn’t see one without the other; they were best friends… He took friendship very seriously, if he called you “friend”, he meant it. King will be greatly missed.   He departed this life on Wednesday, December 29, 2021. King is preceded in death by a sister, Carla Hyman; and maternal grandparents, Alvin and Charlene Davis.    King leaves to cherish his memory: his wife Marshonna “Sug” Hyman; two sons: Kamarie Hyman and Preston Hyman; a daughter, KiLyra Johnson; two grandsons: Cas and Kayden; his father, Charles R. Hyman, Sr. (Argentina); his mother, Richelle Phillips Jackson (Ron); two brothers, Brandon Hyman and Charles R. Hyman, Jr.; two sisters: Latoya Johnson (Darreyl) and Charlzetta Hyman; his paternal grandparents, James and Helen Broadnax; his mother-in- law, Marvellae Clark; three brothers-in-laws and three sisters-in-laws; several aunts, uncles, nieces, nephews, cousins and a host other relatives and friends.

The family of Dennis O'Keith Hyman created this Life Tributes page to make it easy to share your memories.

Send flowers to the Hyman family.