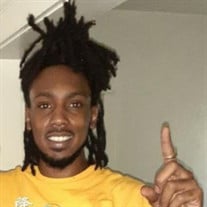 Devon Lamont Key Sunrise 07-05-1997 - Sunset 10-2-2021 Devon Lamont Key, age 24, was born on July 5, 1997 in Kansas City Missouri at Truman Medical Center to his parents Latasha (Brown) Robinson and Gary Key. Devon was Latasha’s first-born son. Devon attended Bryant Elementary, Southwest Middle School and received his high school diploma from the Alternative Resource Center in Kansas City Missouri. After receiving his formal education, Devon went on to work in various career fields but his true passion was music. Devon was a well-respected young man, who always tried to help others in the best way possible. He was devoted to accomplishing his goals and dreams and had ambitions of being great at whatever he set his mind to do. Devon was a proud and devoted father to daughter, Tavaeha and played a critical role her life. Devon was very outgoing and always touched the lives of everyone around him in a positive way. He enjoyed playing basketball, hanging out with close family and friends and was a talented musical genius with lyrics that spoke to the hearts of many. He showed love and respect to others and was well respected by his peers and other family members including a host of younger male cousins; Tyreeh, Zae, Rashad, Keyshawn and Domo. Devon definitely was his mother’s “right-hand man” and was an awesome big brother to his younger brother, Da-Shawn. Devon had a glow in his eyes that would light up the whole room which made anyone that came in contact with him want to be in his presence. He could turn a negative situation into a positive one at any given time. Devon began focusing on his musical career and started recording numerous tracks. These songs will live on forever and his legacy will continue on, especially by those who respected him, his talent and understood what he had to offer to the music industry and this world as a whole. Devon departed this life on October 2, 2021. He was preceded in death by his uncle, Martinez Brown and great aunt, Vanessa Brown-Ealy. Left to cherish Devon’s memory: his daughter, Tavaeha Marie Felicitas Key; mother, Latasha Robinson (Calvin) and father, Gary Key; one brother, Da-Shawn Robinson; special friend Tonya Gonzales; grandparents, Melanie and Robert Anderson, grandmother, Linda Robinson and great grandmother, Helen Brown; great uncle Lafayette Brown (Deborah) great aunt, Valerie Doyle (Lewis), great uncle, Dan Brown Jr. (Brenda), great uncle, Marcus Brown; his uncle, Marquis Brown; aunts: Robinique Giles (David) of Red Oak, TX, Lakeisha Brown, Jameelah Barnett (Ronald) of Little Elm, TX, Colanda Brown of Dallas, TX, Miesha Brown whom affectionately called him “Mancake”, Treshawn Brown, and Aunt Joyce; several cousins and a host of other loving family and friends.

The family of Devon Lamont Key created this Life Tributes page to make it easy to share your memories.

Send flowers to the Key family.