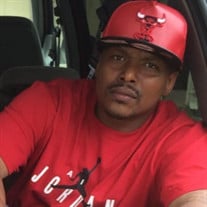 Randolph Donte Douglas, 44, affectionately known as, “Donte” or “Tae”, was born April 8, 1977 in Kansas City, MO to Randolph “Randy” Harris and Cecile “Cookie” Simmons. He was proceeded in death by both grandfathers, Clint Douglas, Sr. and Edward Harris, Sr., and his grandmother, Carrie Harris. Donte was educated in the Kansas City Missouri School District and obtained his GED. He was an entrepreneur and was an active servant in the streets of Kansas City. Tae was a Baptist and was a member of Prince of Peace Baptist Church. He was known for bringing everybody together and can make laughter in the hardest times. Tae was a family man who loved his kids more than he loved life itself. He was protective over anybody he loved, a true warrior to his loved ones. A real “OG”, comedian, hard worker, great story teller, charmer, social butterfly had a “3rd ” eye for nonsense. If you ever been around him you definitely got a story to tell. If you knew him, you’ll never forget him. He departed this life on February 22, 2022 (02-22-22) at Centerpoint Medical Center, Independence, MO. Tae leaves to cherish his memory: his parents, Randy Harris, Cookie Simmons and stepfather Eric Simmons, Sr.; his sons: Dee Johnson, Kyrie and Khalil Douglas; his daughters, Donae, Kyla, and Charlie Douglas; his granddaughters, Naomi and Kimora; his brothers: Clint, Eric Jr, Damion, Cortez and Aaron; his sisters, Ericka and Lakisha; his uncles: Clint Jr., Gail Sr, Carl, and Lawrence; his aunts: Sharon J. (John), Sharon Mc. (Lawrence), Karen P. and Patricia C. (Darryl); his grandmother Senoria Davis; several nieces and nephews, especially his nephew Jalen; a host of cousins and other loving family and friends.

The family of Donte R Douglas created this Life Tributes page to make it easy to share your memories.

Send flowers to the Douglas family.