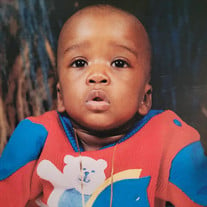 31 years ago, on August 23, 1990 God blessed us with a chubby black baby boy by the name of Donte Edward Owens. He was born and raised in Kansas City, Missouri. Miquel Owens and Angelice Owens were the proud parents of Donte. Donte was preceded in death by his uncle, James E. Johnson; aunt, Tina M. Johnson and cousin, Michael L. Harris, Jr. all of whom he loved. Donte was educated in the Kansas City Missouri School District attending Westport High school. During his time at Westport, he was involved in various school activities. Donte was a fun and loving person, if you knew Donte you knew that he loved to eat and talk trash. He was such a loving person; as a child, he built his own personal relationship with our Lord and Savior Jesus Christ. During family events or whenever we would all get together, when the music came on, Donte would start dancing and we would all joke and tease him about how he danced like Carlton off of The Fresh Prince. Donte was really a momma’s boy… He was the only child and if he was ever in trouble, he would run to Momma or Grandma for help. We are truly going to miss the talks, laughs, hugs, and trash talking, but most of all we are going to miss his presence here with us here on earth. Donte was a very hard worker; he was employed by Sun Fresh Grocery Store. Any job that Donte had, he took pride in it and always made new friends. Donte was blessed with a beautiful baby girl, Damoni Owens, who is now two years of age. When Donte found out that he would be blessed with a baby girl he would always talk about how he wanted to give her the world. Donte looked forward to every weekend because he knew that was his time to spend with the joy of his life, Damoni. Although Donte was the only child, he was so close to his male cousins that you would think they were brothers. Donte loved family and he always had that one special spot in his heart for his grandmother. Donte leaves to cherish his memory: his daughter, Damoni Owens; his father, Miguel Owens and his mother, Angelice Owens; his grandmother, Shirley Johnson; his aunt, Nicole Johnson; his very close cousins: Cortez Owens, Londale Harris, Whitney Harris, Brandon Hawkins and Mya Hawkins; a host of other loving family and friends.

31 years ago, on August 23, 1990 God blessed us with a chubby black baby boy by the name of Donte Edward Owens. He was born and raised in Kansas City, Missouri. Miquel Owens and Angelice Owens were the proud parents of Donte. Donte was preceded... View Obituary & Service Information

The family of Donte Edward Owens created this Life Tributes page to make it easy to share your memories.

Send flowers to the Owens family.