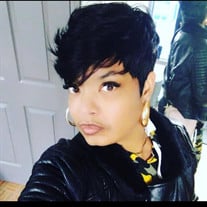 EBONY Engendering, Benevolence, Optimistically, Never, Yielding Ebony Raquel Neal entertained her first party when she took that first breath of air on March 2nd, 1975. She was ushered into the world by her mother Renee Hall and conceived with her father Norman Woodley. Since that first celebration at birth, Ebony made sure that every other day was just that...a celebration. Ebony celebrated life with thousands of people in her God-given 46 years. The people she celebrated the most with were her grandparents Alphonso and Edith Nelson, her siblings Bhishm “Deo” and Aryan “Dax” Neal, Nikita Brown, Narisha Woodley, and Neisha Martin, her children, Chablis Sanja, Dionte Neal, Jodecy Winzer, and Emareon Gray, her 6 grandchildren Zariyah Neal, Zipora, Iris and Enoch Sanja, Avery and Pyper Neal. Ebony is survived by her husband Ebony Henderson. The “CELEBONYs” were married on April 20th, 2019, and had cherished the presence and love of each other until that fateful day on April 17th when Ebony took her last breath at Research Medical Center in Kansas City, Missouri. Ebony and her husband “Frog” loved each other dearly. He cared for and tended to her as she lived and coped with her diminishing health condition, primarily a result of congestive heart failure. They were best friends and that was obvious to anyone who witnessed the nature of their relationship. Born a bonafide hustler and a self-made entrepreneur, Ebony always had a way of generating income on her own and refused to stay on a “The Mans” clock. From braiding to selling furniture Ebony did it all and always made a way to provide for those that depended on her. If Ebony had to be described in one word it would be “beautiful”, both inside and out. Her soul radiated with kindness and love. She had a soft spot for the homeless, the broken-hearted, and the less fortunate and especially children. She was always willing to give up her last for the joy she received from helping others. Forever the center of the attention Ebony was not only the life of the party...she WAS the party and no party will ever be the same without her. Without a doubt, she will be dearly missed, forever and always. Ebony had a relationship with God and Christ and was comforted by the Holy Spirit until her spirit departed from her body. Ebony leaves to cherish in memory her loving husband of 3 years, Ebony Henderson (KCMO); Mother; Renee Hall (Phoenix, AZ); Father; Norman (Yvonne) Woodley (KCMO); Maternal Grandmother; Edith Nelson (Phoenix, AZ); one daughter; Chablis (Mchiwa) Sanja (Tucson, AZ); three sons; Dionte Neal (KCMO), Jodecy Winzer (Tucson, AZ), Emareon Gray (KCMO), 2 Brothers; Bhishm “Deo” Neal, Aryan “Dax” Neal; 3 sisters; Nikita Brown (KCMO), Narisha Woodley (Lee’s Summit, MO), Neisha (Kamieon) Martin (Lee’s Summit, MO). 6 Grandchildren; Zariyah Neal, Zipora Sanja, Iris Sanja, Enoch Sanja, Avery Neal, and Pyper Neal. A host of nieces, nephews, cousins, and other relatives & friends

EBONY Engendering, Benevolence, Optimistically, Never, Yielding Ebony Raquel Neal entertained her first party when she took that first breath of air on March 2nd, 1975. She was ushered into the world by her mother Renee Hall and conceived... View Obituary & Service Information

The family of Ebony Raquel Neal created this Life Tributes page to make it easy to share your memories.

Send flowers to the Neal family.