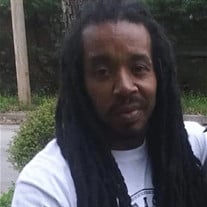 Reflections of Life Edward Joseph Fleming Sr. 41, was born on October 29, 1979 in Kansas City, Missouri, to Joseph Timley & Dessaline Lora. He was preceded in death by his father Joseph Timley, his brothers Robert Fleming Sr, Howard Timley, Donald Fleming, and his sister Donna Fleming. Edward was educated in the Kansas City, Missouri school district. Where he later received his GED. Shortly after he went to college and received a diploma in HVAC Heating & Cooling. He then went on to be a Grocery Manager at Happy Foods Grocery Store, which he loved. He loved to work, he was very hardworking. Edward accepted Christ as his personal Lord and Savior at an early age at Grace United Presbyterian Church. He later Worked at Grace United Presbyterian Church transporting the children from school to Tutoring. Edward was a loving & caring father. He devoted his time to his family. He loved being around his family, girlfriend and friends. Although he would have times where he didn’t feel too good he would not let anything get the best of him. Those who know him best described him as a man that is brave, kind, reliable, funny, smart, family oriented with a loving soul. He loved giving and taking care of the people around him. He was a King! Edward leaves to cherish his Mother Dessaline Lora, the love of his life Gennifer Montoya, three children Shayla Fleming, Edward J. Fleming Jr. and Troi N. One bonus child Armya B. Four brothers, Irvin Timley, Monty Fleming, Joseph Fleming, and James Fleming. Two sisters, Jody Gunn (Tony) & Loretta Fleming (Donald Jr.) A host of nieces, nephews, cousins, one great uncle and one great aunt.

The family of Edward Joseph Fleming Sr created this Life Tributes page to make it easy to share your memories.

Send flowers to the Fleming family.