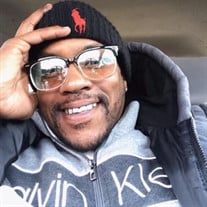 Erron Imariu Holley, age 49, affectionately known as “AJ”, was born April 28, 1972 at General Hospital No. 2 in Kansas City, Missouri, to Sharon Alexia (Holley) Stockdale and Charles F. “Flip” McCulley. AJ departed this life on June 27, 2021. He was preceded in death by his grandparents, Aron and Alexia Holley. AJ was a lifelong resident of Kansas City, Missouri. He was educated In the Kansas City Missouri School District, graduating from Van Horn High School. AJ was an entrepreneur; he loved fashion and was a talented clothing designer. While in Omaha, Nebraska, AJ worked as a Gang Prevention Specialist; his clients respected him and responded very well to his advice and guidance. He loved basketball as well, but what he loved most of all, was being a father. AJ’s children were his pride and joy. AJ was a Christian. He professed Christ and believed that the Church was in him and a building did not determine evidence of his relationship with Jesus Christ. AJ leaves to cherish his memory: his five children: son and namesake, Erron Imariu Holley ll; daughters: Darion Holley-Peterson, Emoni Holley, Amber Miller and Eireona Holley all of Kansas City, Missouri; his mother, Sharon Stockdale of Wichita, Kansas; his brother, Marvin G. Boston of Kansas City, Missouri; two sisters: Diamond Holley of Kansas City, Missouri and Santayia Boston of Wichita, Kansas; his loving aunts: Patricia Holley-Cloud (Ed) of Murrieta, California, Bonita Holley-Moten (the late James) of Kansas City, Missouri and Yolanda Holley of Kansas City, Missouri; his best Friend, Michael McMillian; a very special significant other Herlina Williams known lovingly by AJ as “Sugar”, who is with child; several cousins, nieces, nephews and other loving family and friends.

The family of Erron Imariu Holly created this Life Tributes page to make it easy to share your memories.

Send flowers to the Holly family.