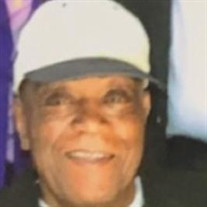 Fred Webster Raglon August 11, 1946 - September 16, 2021 Fred Webster Raglon, affectionately known as “Web”, was born August 11, 1946 to the family of Odie Raglon, Sr. and Nona Lee (Morrison) Raglon in Washington, Arkansas. Both his mother and father preceded him in death, along with two sisters, Willie Pearl Todd and Ruby Raglon; four brothers: Alvin Raglon, Elvin Raglon, Odie Raglon, Jr. and John Raglon; three nephews: Stanley Morrow, Doyle Raglon, and Willie Raglon. Upon graduating from high school, Web joined the military. He was in the United States Army and the United States Navy. While in the Army, he served as a Paratrooper, Web served his country well. He received many honors including several Purple Hearts. Upon departing from the military. He returned to Kansas City and began his career with the Kansas City Fire Department. After leaving the fire department he worked at Armco Steel until his retirement. Eventually Web returned to Arkansas. Web loved his family and friends; he would travel to Kansas City and Chicago to attend family events on a regular basis. He taught many of his nieces and nephews how to drive a car. He enjoyed playing bid wiz, fishing and gardening. Web stayed abreast of current events and at any given time he would engage in a good political debate. He also enjoyed a good laugh and many times you could hear him say “That ole boy” or “That ole girl” which would bring a laugh to himself and whomever else was in the conversation. That phrase is one that Web coined and is used throughout the family. Fred Webster Raglon departed this life on September 16, 2021 at 9:34 a.m. He is survived by: his daughters, Yolonda Vogel, of Fort Smith, Arkansas and Donishia Staton, of Gurdon, Arkansas; three sisters: Jewel Anderson and Annie J. Smith of Chicago, IL and Hazel Baldwin of Kansas City, MO: one brother, Jimmy Raglon of Kansas City, MO; three grandchildren: Shavone Banks, Chanee Collins, and Tyrell Webster Vogel of Kansas City, MO, a host of nieces, nephews, cousins, other relatives and many special friends.

The family of Fred Webster Raglon created this Life Tributes page to make it easy to share your memories.

Send flowers to the Raglon family.