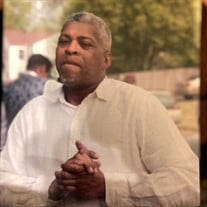 Not sure what to send?

Ivory Lu gene Nevels Jr. passed away from a long-term illness on June 12, 2022, at the age of 64. Ivory Nevels, Jr. was the first born to Ivory Nevels, Sr and Eunice (Briscoe) Nevels in Kansas City, Missouri on January 3, 1958. Ivory attended Paseo High School and graduated the year of 1976. He met his high school sweetheart Lois Bland and was married to her for numerous……years. To this union he gained a beautiful daughter, Trina Nicole Bland, whom he loved dearly and raised. To this union they had two other beautiful daughters, Laquitta Nevels and Ivory Talise Nevels. Ivory was a member of Fellowship Right Baptist Church, where his own brother was his Pastor. His Pastor spent many countless hours, days and months visiting and praying over him seeking to make sure his member and big brother was saved and would enter into the Kingdom of Heaven. Pastor Nevels also took the time to make sure Ivory Jr. would be able to attend church throughout his illness. He gave him all the love and care that was needed at the time, during this time he became closer to God. Ivory Nevels Jr. worked repairing and servicing vacuum cleaners for Hoover and Mar-beck Company for many of years until he decided to help his father with his lawncare business. He worked endless hours making sure all customers were happy and satisfied with the service received until his health failed. Ivory in his past time enjoyed spending time with his special cousins, family and friends. He liked dancing and really got a kick out of singing for his parent’s 50 th Wedding Anniversary. He loved watching the Chiefs, Royals and got hooked on Young and the Restless. Ivory was predeceased by his maternal grandparents Wilson and Louvenia Briscoe and his paternal grandparents Robert and Ivory B Nevels; his brother Keith Andrew Nevels. Left to cherish his memory is his children Trina, Laquitta and Ivory; his parents Ivory Sr and Eunice Nevels; brothers Lawrence (Celitha) Nevels and Darrell (Elissa) Nevels and his sisters Alisa (Damon) Bryant and Revena Walker; his ten grandchildren, aunts, nieces, nephews, cousins and a special cousin Jerry Nevels.

The family of Ivory Lugene Nevels created this Life Tributes page to make it easy to share your memories.

Send flowers to the Nevels family.