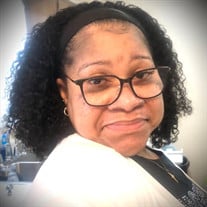 Jacqulyne “Jackye” Bell January 11, 1965 - September 6, 2021 Jacqulyne Denise Bell, affectionately known as “Jackye” or “GiGi” was born the baby of 4 girls on January 11, 1965 to the union of Vernessa and Kenneth Williams in Kansas City, MO. She was educated in the Kansas City Missouri Public School System and graduated from Central High School class of 1983. She later obtained continued education certifications in Cosmetology and Real Estate Sales. She’s also received numerous City certifications for various training courses. Jackye was united in holy matrimony to the late Tory Bell on March 21, 1985. To this union, 3 beautiful “princesses” (as she often called them) were born. She was employed by the City of Kansas City, Missouri since July 9, 1990 in the Revenue and Finance Department, later promoted to the Municipal Court and eventually transferred to the Permits Division of the City Planning and Development department from which she recently retired May 31, 2021. She received a Service Excellence Award from former Mayor Sly James and former City Manager Troy Schulte on June 12, 2014. Jackye not only was a devoted employee, but an impeccable mother; making her girls the center of her life! She will greatly be missed for her infectious smile, great advice, outgoing personality, “wonderful” cooking and her inability to meet a stranger. She has sincerely touched the lives of many and everyone that knows her, loves her! Jackye accepted Christ at an early age and recently rededicated her life to Christ and was baptized under the leadership of Pastor Dwight E. Scott at Bannister Road Baptist Church on May 6, 2021. She departed this life on September 6, 2021 at St. Luke’s Hospital after a short battle with Pulmonary Fibrosis. She was preceded in death by both parents, Vernessa and Kenneth Williams, oldest sister, Stephanie Thomas and husband Tory Bell. Jackye leaves to cherish her memory daughters Jacque’ Marshall (Raymon) of Memphis, TN, Latoya Gordon and Torvonna Bell (DeAnthony) of Lee’s Summit, MO; grandsons Emery and Eaiden Marshall, Kenneth Draper, Chae White Jr., Dylan “Busy” Carter; grand-daughter Eriss Bluett; sisters Karmen and Cassandra Williams both of the City; nephew William Williams (Agnes), Mother-in-Law Odeal Bell; God-Children

The family of Jacqulyn Denise Bell created this Life Tributes page to make it easy to share your memories.

Send flowers to the Bell family.