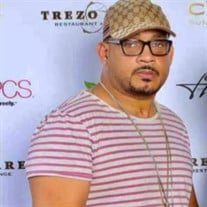 On November 10th, 1972 the Lord blessed Margaret Ann Dickson with her first born, a beautiful baby boy Jan Jabbar Dickson. Jan was educated in the Kansas City, MO public school system and would later go on to get his GED. Jan accepted Christ in his earlier years. He was baptized and attended Church of God in Christ with his grandmother. Jan continued to believe and have faith in God. Jan began working as a teen. He was a hard, dedicated worker. Whenever they needed someone to work, Jan would stop what he was doing and go to work. Jan later became an entrepreneur with several small business ventures. Very caring and loving person. Jan did not meet a stranger and was always willing to help family, friends, and those in need. Although he did not pursue a career Jan was a gifted artist and drew in his spare time. Jan loved spending time with family and friends and living life to the fullest. Jan departed from earth unexpectedly on Thursday August 26th, 2021 at his home in Kansas City, MO where he was born and raised. Jan was preceded in death by his mother Margret Ann Dickson, grandmother Zenobia Dickson and grandfather, Leonard S Dickson Sr. TULILL.I.....-------- hw. Jan leaves to cherish his memories his brother Kenny Dickson, three daughters Jasmine Dickson-Jackson, Nicoria Tharp, and Selena Dickson, five grandchildren Gromyko White Jr., Donnnechius White, Charisma White, Emery White and Zoe Johnson-Tharp, two uncles Leonard (Linda) Dickson Jr Gary (Tina) Dickson, nephew Kenny Dickson, niece Dashaun Dickson, all of Kansas City, MO and a host of cousins, extended family, and friends.

The family of Jan Jabbar Dickson created this Life Tributes page to make it easy to share your memories.

Send flowers to the Dickson family.