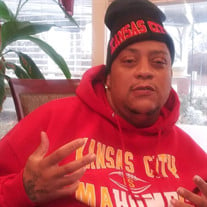 Our family happily welcomed into this life JaShawna Renee’ Smith, 47 years ago on August 7, 1974. Daughter of the late great Debra Smith-Williams of Kansas City and James Murdock of Denver, Colorado. Shawn attended her first formative years of schooling in Denver, CO and later transferred back to KC where she attended Elementary and High School. Eventually she would go on to obtain her GED in her later years. Shawn was always an avid sports fan. She loved the NBA (Basketball) but favored the NFL (Football) of course favoring the Kansas City Chiefs in hope that they’d make it to the Super Bowl again this season. She also loved shopping for the latest in sportswear as she promoted her style in pictures. Better known to her Facebook friends as “50 Grand’’, Shawn enjoyed taking selfies that she often shared. Shawn enjoyed listening to rap music while sampling a little R&B Old School from time to time. Shawn had a strong love for her family. She and sister Tameca, her only sibling, were inseparable. But Tameca’s GRANDKIDS….they were very much cherished and adored by Shawn without a doubt. She took such great pride in the nurturing of those little ones. She definitely knew all of them personally with their cute little individualistic unique personalities and attitudes. (Often referred to them as “HOLLYWOOD KIDZ*’’) Her descriptive style of bragging on each of them was truly amazing. Overjoyed and excited over the birth of the latest addition to her family, the Twins Riley & Raine, brought continuously joy and happiness. Then came more great baby news of another kid expected to be born this next Spring in Canada. A little boy in which Shawn already has predicted to be a baller as in a Toronto Raptor. Yet still she received more baby news coming this next summer/another set of twins. This truly excited her even more and really lifted her spirits as she endured her failing health issues. Shawn leaves to cherish her memory: her dad, James Murdock of Denver, CO.; her maternal grandmother, “The Legendary Shirley Banks”; her only sibling, Tameca Smith; aunts: Joyce Jordan (Alan), Donna Swink (Dennis) and Valarie Council (Lee); her uncle: Edward Banks, Jr. (Cassandra); great-aunts: Gwen Fight-Davis, Pamela Oliver, and Kathleen Guinn; her great uncle, Kenneth Smith (Murine); nieces: Cherish Smith, Bryauna Robinson, & Jhaila Smith; nephews: Michael Young, Jr., Tremaine Young, and Antwoine Thurman; great nieces & nephews/(HOLLYWOOD KIDZ*): Aleigah Young, Tremaine Young, Jr., Bryt’lan Hendricks, British Young, Londyn Young, Aubrei Smith, Camauri Smith, Jamill Smith, Twins- Riley, Raine Buckner, Michael Young III and Mi’Yauna Young. Cousins by the dozens and many friends. Special Friends: Nikki Banks, and best friend Rita Fugate

The family of JaShawn Renee Smith created this Life Tributes page to make it easy to share your memories.

Our family happily welcomed into this life JaShawna Renee’ Smith,...

Send flowers to the Smith family.