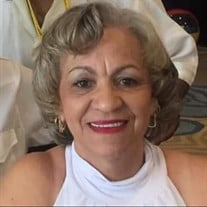 Judy Mary (Vappie) Randle, age 68, was born September 23, 1952 in New Orleans, Louisiana to Ernest and Victoria (Thomatis) Vappie. She was proceeded in death by her parents, siblings Phyllis Gillis, Grace Reffells, Earnest Vappie, Bruce Vappie, Joyce Dalferes and Will Vappie. Judy was educated in the New Orleans School District, attending Carver High School until 1965, when segregation ended. Due to the privilege of integration, she transferred to Kennedy High School, where she was of the graduating class of 1970. Judy was a talented hair stylist; she attended beauty college and began working at “Jay’s Beauty Salon”, which her sister Joyce owned and operated. 1970 was an eventful year for Judy. She met and married Isadore Rivarde, Jr.; from that union, a beautiful baby girl was born. Judy relocated to Kansas City, Missouri, where she was blessed to meet the love of her life, the late, Leonard B. “Jim” Randle. They married in 1996; they seemed to have shared a lifetime of bliss until Jim’s passing on November 3, 2020; to this union, their son was born. Judy was raised in the Catholic Faith attending Risen Christ Catholic Church; after meeting Jim, Metropolitan Missionary Baptist Church became her church home, although she still respected her catholic beliefs. Judy worked as the secretary at St Vincent’s School, now known as Operation Breakthrough. She then took employment as a sales consultant at “Morris and Sons Beauty Supply” and “Evelyn’s Beauty Supply”. In the late 1990’s she found her true calling and became a home health care worker for Bishop John Sullivan. When Bishop Sullivan passed, she started a career with the Kansas City Municipal Court. When she retired from the city, she became a legal assistant for Holliday Law Firm, LLC; extremely dedicated to and respected by, Harold Holliday, III. Judy was an excellent entertainer. She found joy in cooking and would cook for every holiday or just because she needed something to do. She would cook a huge meal and call her family and friends to come over and get a plate. Every Christmas, she would make dozens and dozens of quiches as gifts for all her family and friends. Judy had a big heart; she was extremely selfless and genuinely took delight in helping others. For nearly 10 years or better, she supported the “Know Joey Foundation” by cooking meals for the staff and volunteers as they work the turkey drive and fundraisers through the long nights. Judy never met a stranger and would talk to everyone until she knew all about their family and friends and then would call or text, checking on them often. If I wanted to know anything about my sons, I would call her to find out… Judy was also known for her love for dancing. She had a signature move which required a certain piece of furniture, her hands in the air and her beautiful, brilliant smile. �� On any given Friday you could find her and Jim on 18 th and Vine, 2-stepping the night away. Judy departed this life and received her wings on September 21, 2021. Although her physical is longer here, there’s comfort in knowing that her spirit is with the Lord. The proof is the love she had for the Lord and how she allowed Him to work through her for others. The proof was shown through how she loved her husband, cared for him, and honored him until his last breath. The proof was sealed in her son’s and daughter’s hearts by the unconditional love she had for them and her grandchildren. Left to cherish Judy’s precious memories: her children, Vacinta Oliver and Quintin Randle; grandchildren: Keith Irvin, Jr, Jerel Rimpson, and Anthony Sims; her great-grandson, Aaron Robinson; Siblings: Vickie Arnold (Jack), David Vappie (Elaine) and Threquinta Parker; several nieces and nephews, aunts, uncles and cousins and a host of other loving family and friends.

The family of Judy Mary Randle created this Life Tributes page to make it easy to share your memories.

Send flowers to the Randle family.