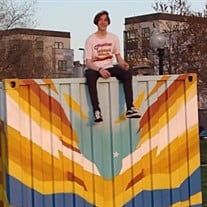 Kaleb Daniel Martin, “K2”, age 17, was born July 29, 2004 in Ottawa, KS, to his mother Kimberly D. Martin “Kim” and sister Kayla. Kaleb was preceded in death by his great grandparents, Jimmie R. and Marianne Bass and cousins, Michelle L. Bass and Jimmie R. “Jim Jim” Bass, IV. Kaleb’s mother, Kim, was blessed to meet Delbert “Lamont” Turner. Kim moved her family to Overland Park, KS; she and Lamont were married soon after. The family grew and Lamont forever became “Dad”. Kaleb immediately stole the hearts of everyone he came in contact with and was loved by all. Kaleb attended Bethel SDA Church and had accepted Jesus Christ as his Lord and Savior. He was active in the youth department and was an active member of the Central States Conference “CSC” of Seventh Day Adventist K. C. Umoja Knights Pathfinders, the equivalent to the Girls and Boys Scouts, where he earned many badges. He was selected to represent CSC at the 2017 Camporee in South Dakota. In 2018 he attended his first CSC Pathfinders Camp-meeting and was nominated to raise the flag every morning to start the salute and the national anthem. He recently expressed his interest in becoming a team leader, which would lead to Master. Kaleb was also a volunteer with the Community Services Department at the church, helping with the food pantry; stocking shelves, bagging food and the monthly food distribution, setting up and cleaning afterwards. Kaleb had a heart of gold and loved his family. He was compassionate, kind and caring. He was fun loving and also a prankster. Kaleb loved learning and took joy in learning unusual details about things and sharing his knowledge with you. He would often begin by saying “Did you know...”. Animals were a big part of his life too. Kaleb and his two younger siblings had 4 pets that he and his siblings cared for. A dog, Remington or “Remy”; 2 cats, Morpheus and Butterscotch, and a lizard, Liz. Kaleb's dreams and ambitions were to be the best at whatever he did. He was a natural at fixing things; especially cars. He was preparing to be an automotive expert and a photographer. His daily activities included working on cars, photography, video gaming, content production for Tik Tok and social media and of course attending school. He was also briefly a part of the technology team at church learning how to operate the sound system and video equipment. He had a knack for repairing IPhones and other electronic gadgets. But his passion was for cars; especially for the Shelby Mustang. He loved going to car races with his dad and playing video games with him and his siblings. K2, as he was affectionately called by Grandma Carole, attended school both in Kansas and Missouri, He began playing the French Horn in the band at Indian Woods Middle School and continued during his freshman and sophomore years at Shawnee Mission South High School. He was currently in his senior year attending Southeast High School, in Kansas City, Missouri where he was taking classes to earn his automotive certification and was looking forward to continuing his education in the fall at Penn Valley Community College. Kaleb leaves to cherish his memory: his parents: Kim D. Pankey and Lamont Turner; siblings: Kayla D. Martin Dominick, Kameron D. Turner, Kammi D. Turner; Step-father, Stephon Pankey and step-brother, Damari Pankey; grandmother, Ramona Martin of Ottawa, KS; grandparents, Carole and Grover Sanders of Kansas City, MO, and grandfather, Marshall Turner, I of Wichita, KS; aunts and uncles: Teresa and Seth Tucker of Princeton, KS; Marshall Turner, II, Christopher and Tarah Turner, Sr. both of Wichita, KS; great aunts and uncles: Blanka and Kenny Bellinger of Rantoul, KS, Jimmie R. JR. and Beth Bass of Chisholm ACT, Australia. Tom and Kristie Bass of Ottawa, KS, Marsha Washington, James Barrier, George Barrier, and Roy Manuel all of Wichita, KS, Vernis Barrier, Chicago, Ill; cousins: Dakota and Lauren Tucker of Eudora, KS, Sierra Tucker of Manhattan, KS, Shaun and Angie Jones, Wichita, KS, Tacoa and Richard Lowe and JoJo, Atlanta, GA, Christopher Turner, Jr., Wilmington, VA, Malcolm Turner, Marlyn Turner, Derrick Turner, Zorianna Turner, and Marcel Turner, all of Wichita, KS; god-mother, Keyonna Wright and god-sister, Paris Wright; a host of other loving family and friends.

The family of Kaleb Daniel Martin created this Life Tributes page to make it easy to share your memories.

Send flowers to the Martin family.