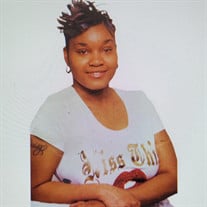 LaCarol Monique Walker was born May 9, 1981 to Daisy Walker at KU Medical Center to Daisy L. Walker and Ernest Williams, Jr. who preceded LaCarol in death on June 16, 2016 in Kansas City, MO. LaCarol was the only child of Daisy Walker. LaCarol was also preceded in death by her grandparents, Mr. David L. Walker and Mrs. Mamie L. Walker. LaCarol relocated to Tulsa, Oklahoma with her mother in November 1983. She attended Marzett Day Care. LaCarol won first place in the Oklahoma Baby Pageant in 1985 and 1986. She relocated to Kansas City, KS in 1989 with her mother. LaCarol attended Muncie Elementary from the fourth grade until the sixth grade. She also attended Pearson Middle School and Turner High School. LaCarol graduated from Job Corps to receive a certification as a computer technician. She completed her high school diploma from Manhattan High School in Manhattan, KS. LaCarol spent time volunteering at the Equal Opportunity Foundation, the Forest Glen Youth Program, and the Summer Program in Kansas City, KS. In 2002, LaCarol worked for an auto parts store and later found her passion in the nursing field serving as a caregiver for the Best Choice Health Care Services. She worked as a caregiver for six years. Before she encountered complications with diabetes, LaCarol spent an enormous amount of time with her family. She loved music, cooking, and working with children and adults. Her favorite time of the year was during the months of May and June to celebrate her birthday and her mother’s birthday. She was affectionately known as “Bear” by those who loved her. Her aunts, Esther Walker and Martha Butler, as well as her uncle, Jerry Walker, all preceded LaCarol in death. LaCarol is survived by her son, Daviun Deron Goldsmith Walker; her significant other, David Deron Goldsmith; her aunts: Mary Young, Melba Walker, Bonnie Walker, Rosemary Onwuemegbulem, and Polly Harrington; her uncles: Jimmie James and Lee Benton; her godmothers, Carol Dudley and Joanna Johnson. She leaves to cherish a host of cousins.

LaCarol Monique Walker was born May 9, 1981 to Daisy Walker at KU Medical Center to Daisy L. Walker and Ernest Williams, Jr. who preceded LaCarol in death on June 16, 2016 in Kansas City, MO. LaCarol was the only child of Daisy Walker. LaCarol... View Obituary & Service Information

The family of LaCarol Monique Walker created this Life Tributes page to make it easy to share your memories.

Send flowers to the Walker family.