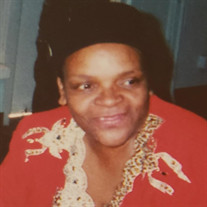 Lauren Margo Pinkney Solomon was born August 11, 1951 to Allie and Melvin Pinkney in McAlester, Oklahoma. She was the 14th sibling of 15 children born to that union. She was preceded in death by her husband F.E. Solomon, son Frederick Solomon, daughter n law Lanea Solomon (Filmore), mother and father Allie and Melvin Pinkney; sisters Theron Rosier, Eva Ann Brown, Mary Lou Tremble; Jessie Pinkney and Rhonda Sue Simmons; brothers George, Melvin Jr., James, Calvin, Howard, Noel and Richard Pinkney. Lauren received her primary education in Oklahoma then the family moved to Kansas City, Missouri in 1964 where she later graduated Central High School in 1969. She then entered the workforce holding various positions until she met the love of her life. Lauren was married to F.E. Solomon on November 29, 1974. Lauren accepted Christ early in life and was baptized at Zion Grove Baptist Church. She later attended Southside Baptist Church where she loved to invite her family to visit. Lauren made many friends during her years in Kansas City who gave her names like Hillbilly because of her love for cowgirl hats. She traveled the nation visiting each of her siblings by any means via bus, train or plane if her siblings were ill she was on her way. Most of all she loved spending time with her children for the holidays and decorated for each one. All her life she always mentioned her beloved and cherished husband. She leaves to cherish her memory: daughter Lauren Y.; sons Filmore and Franklin Solomon, 10 grandchildren: Howard III, Frederick Jr., Geran Jr., Falisha, Falawn, Wanya’, Franklin, Jamil, Jermiah, Josiah and one great granddaughter Honesti. Her beloved sister Bertha Cameron of Dayton, Ohio and brother Muriel Pinkney of the city are left to carry her memory on along with a host of nieces, nephews, family friend Nell Sherman, other family and friends.

Lauren Margo Pinkney Solomon was born August 11, 1951 to Allie and Melvin Pinkney in McAlester, Oklahoma. She was the 14th sibling of 15 children born to that union. She was preceded in death by her husband F.E. Solomon, son Frederick Solomon,... View Obituary & Service Information

The family of Mrs Lauren Margo Solomon created this Life Tributes page to make it easy to share your memories.

Send flowers to the Solomon family.