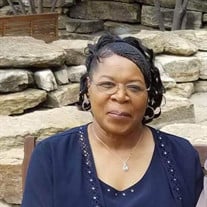 Linda Denise Chamberlain, 63, of Allen, Texas, quietly passed away on December 8, 2021. She was born on September 22, 1958, in Kansas City, Missouri, to Bernice and Daniel Duncan Jr. She was the tenth of fourteen children. Linda gave her life to Christ at the age of sixteen while attending Faith Miracle Full Gospel Church in Kansas City, Missouri. Throughout the years, Linda took her faith seriously. As a mother she taught her children the importance of learning the scriptures of the Christian bible and the importance of living for Jesus. Linda served at Christian Chapel Temple of Faith in Dallas, Texas, in the audio-visual ministry and the Willing Workers Homeless ministry. Through the Willing Workers, she went to homeless shelters and to provide food for those in need. Sometimes she would use her own funds to buy food and make lunches for the homeless feedings. She received her early education in the Kansas City school system and was an alumnus of Central High School. Linda had a love for learning and continued to learn when she moved to Texas with her husband Darryl Chamberlain. In Texas Linda graduated from Texas Institute with a major in Business Programming. She started her own company making websites and repairing computers. Linda Duncan met Darryl Chamberlain while in high school. They started attending church together and later began dating. They married in 1975. The couple raised six sons: Ronnell, Darryl, Robert, Peris, Daniel, and David. Linda will always be remembered for her loving, kind, and generous heart and as a wonderful mother to her children. She also will be remembered for being an excellent cook. She leaves to mourn Darryl Chamberlain, former husband; six sons: Ronnell Duncan of Allen, Texas, Darryl (Tashonda) Chamberlain of Stone Mountain, Georgia, Robert Chamberlain of Lee’s Summit, Missouri, Peris (Ruth) Chamberlain of Aubrey, Texas, Daniel Chamberlain of Allen, Texas, and David Chamberlain of Denton, Texas; three grandchildren, Kenneth, Leslie, and Paxton; five brothers: Jim (BB) Duncan, Philip (TC) Duncan, Arthur (Denise) Duncan, Marvin (Lisa) Duncan, and Darryl (Dana) Duncan, all of Kansas City, Missouri; two sisters Pearl (Curtis) Bates, and Geraldine (Rodney) Hutton, both of Kansas City, Missouri; fifty-six nieces and nephews combined, one hundred two great nieces and nephews combined and twelve great-great nieces and nephews combined, and a host of family and friends. Linda was preceded in death by her parents Bernice and Daniel Duncan, four brothers: Robert Duncan, Daniel Duncan, Ted Duncan and Henry Duncan; two sisters: Lenora Duncan Jones, and Mollie Duncan, and two nephews.

Linda Denise Chamberlain, 63, of Allen, Texas, quietly passed away on December 8, 2021. She was born on September 22, 1958, in Kansas City, Missouri, to Bernice and Daniel Duncan Jr. She was the tenth of fourteen children. Linda gave her life... View Obituary & Service Information

The family of Linda Denise Chamberlain created this Life Tributes page to make it easy to share your memories.

Send flowers to the Chamberlain family.