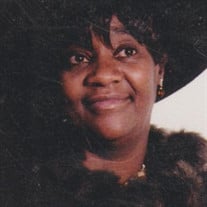 Celebrating the Life, Love, and Legacy of Linda Trenece Clarkson Linda Trenece Clarkson was born on November 3 rd , 1954 in Kansas City, Kansas to proud parents Robert A. Clarkson Sr. and Jean Marie (Shirley) Clarkson. As a child, she grew up in Kansas City Missouri. She was baptized at Galilee Baptist Church under the leadership of Rev. Sinclair Thompson. She also attended Christian Tabernacle COGIC under the leadership of Rev. Emmanuel Newton. All changed when Linda was 13 years old and joined Deliverance Temple COGIC under the leadership of Elder Wilbur Smith Sr. Linda was a very active member of Deliverance Temple for 53 years. It became her family church with her mother, siblings, children, nieces, nephews, cousins and grandchildren all attending through the years. Linda sang in the choir, was an usher on the usher board, and a very dedicated nurse with the hospitality department. Linda attended school at Paseo High School with the class of 1973. Linda never married but had 4 children that were her life named Toni, Dominic, Yoni and Robert. There was nothing that she wouldn’t do for them and she loved them with everything she had. Linda was a caring and nurturing person at heart. She worked as a Cleaning Technician with Woodley Janitorial Services for many years. She also worked as a Caregiver in Private Duty until her health failed and prohibited her from continuing. Linda enjoyed a good bargain. There wasn’t a thrift store that didn’t know her name or smiling face. She was also affectionately named the queen of garage sales. She was the best at finding them. In her younger years, Linda enjoyed traveling the country with her family’s drill team, The Knights of Pythias. She also always looked forward to the Church of God and Christ Women’s Conventions, Convocations, and trips to Memphis with her Deliverance Temple Family. She was known for her liver and onions, pickles wrapped in hamburger, Chicken and Dressing, and her famous sweet potato pie. Linda the fighter, the warrior, the giver, the nurturer, will be missed beyond measure by all that knew and loved her. She was preceded in death by both parents, Robert Clarkson Sr. and Jean Marie Allen, Grandparents Richard and Alma Clarkson, James Shirley and Mary Shirley-Thomas 4 grandchildren, Dominic Clarkson Jr, Dametrius Clarkson, Dominic Clarkson III, Donnyea Guy, and one great granddaughter, Bayleigh Maples. She leaves to honor and cherish her memory, 3 sons, Toni Clarkson Sr, Dominic Clarkson, Robert Clarkson IV all of Kansas City, Missouri. One daughter Yoni Clarkson of Kansas City, Missouri. 5 sisters, Robin Gipson of Red Oak, TX, Ebonee Willis (Donnie), Phyllis Fansworth, Tasha Allen, and Yolanda Clarkson all of Kansas City Missouri. 5 brothers, Robert Allen Cooper of Columbia, MO, Robert Clarkson Jr (Kimberly) of Louisa, VA, Ryan Clarkson, Richard Clarkson, and Michael Allen of Kansas City, MO. Special sisters Minieunette James and Dianne Williams. 20 grandchildren, 13 great grandchildren and 2 on the way, and a host of cousins, nieces, nephews, God children and special friends.

The family of Linda Trenece Clarkson created this Life Tributes page to make it easy to share your memories.

Celebrating the Life, Love, and Legacy of
Linda Trenece Clarkson

Send flowers to the Clarkson family.