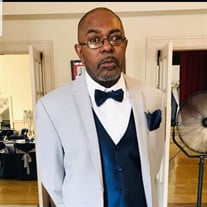 Lionell Hamilton-Bey was born in Shreveport, Louisiana on August 14, 1960 to Freddie Pouncil and Lindora Hamilton. Lionell received his education in Kansas City, Missouri School District.  He attended J.J. Pershing Elementary, Southeast Middle School and Southeast High School. Lionel was a proud member of Southeast’s graduating class of 1978. Lionell was a follower of the Moorish- American faith. He attended The Morish Science Temple of America Inc. Subordinate Temple #65. Lionell had an entrepreneurial spirit.  He was ambitious and took the initiative to develop his own LLC; HB Properties and Investments. The time and energy invested in his career resulted in an array of different business endeavors including but not limited to, buying and selling houses and automobiles. In addition to that, Lionell had a fondness for music, especially R & B classics. He had a solid reputation when it came to his 2-stepping skills. Lionell was a car enthusiast. He had a passionate interest in cars and everything about them; he enjoyed buying them, collecting them, and working on them. Through the course of his lifetime, he remained a loyal fan of the Kansas City Chiefs. Lionell had a delightful spirit.  His smile was contagious.  When in his presence, you couldn’t help but smile in return.  He absolutely LOVED his children, grandchildren, siblings, nieces and nephews and all the rest of his extended family. Lionell was a natural born leader and influencer. He was well known, respected, and loved by an abundance of people throughout his lifetime. He departed this life on Wednesday July 28, 2021. He was proceeded in death by his maternal grandparents, Pinkie Nelson and Dave Jones; paternal grandparents Bertha and Edward Pouncil; mother, Lindora Hamilton; son, Lionell Hamilton Jr., brother Charles Harvey, sister Vickie Johnson-Grimes. He leaves to cherish in his memory, father, Freddie Pouncil; his one and only daughter Chanita Hamilton-Duley (Yntell), sons; Ronell Hamilton, Lamont Barret, Donnell Blanford-Hamilton; sisters Angela Jones, Lisa Phillips, Khalilah Everidge-Pouncil; brothers, Anthony Hamilton, Raymond Hamilton, Michael Hamilton, Frederick Pouncil, and Freddie Beardon; a special friend, Cynthia Phillips; Fourteen grandchildren, Four great-grandchildren and a host of aunts, uncles, nieces, nephews, cousins and friends.

The family of Lionell Hamilton Bey created this Life Tributes page to make it easy to share your memories.

Lionell Hamilton-Bey was born in Shreveport, Louisiana on August...