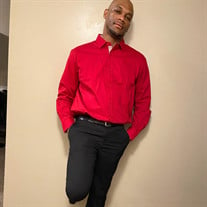 “Celebrating the Life” Malcolm Del’Von Johnson August 14, 1989 – March 25, 2021 Malcolm Del’Von Johnson was born in Kansas City, MO to La’Tess Johnson on August 14, 1989. Malcolm grew up on the East side of Kansas City with his mother and 3 siblings, whom he loved and adored to no end. He was what we would call “a normal child, doing normal things most children do.” However, what everyone did notice that was far beyond his young 10 years of age, was the fact that he exhaled in sports, particularly football. Malcolm played for Pop Warner, where he played such positions as Quarter Back, Defensive End and Line Backer. He was always being cheered on by family and friends, which made Malcolm very proud and eager to continue to exhale in whatever he did. While in high school, Malcolm’s love for sports in general took another turn. He soon learned that he could do well playing basketball as well as football. During his school years at Southeast High School, Malcolm played basketball throughout the years and exhaled immensely in this sport, bringing everyone in the stands to their feet with his ability to make baskets from the middle of the court. Through all of Malcolm’s athlete achievements and the love he spread to others, nothing compared to the event that took place on December 2, 2011. This would be the day the love of life was born, Iniecia Loveah Johnson. This event would change Malcolm’s entire life. Now he finds himself not only a new father, but a protector of his daughter as real as his family and all around him. He brought comfort to everyone by them knowing they were in good hands if Malcolm was around. Malcolm was preceded in death by his mother, La’Tess Johnson, grandfather, Ronald Fells and god-son LeGend Taliferro. He leaves to mourn his passing: daughter Iniecia Johnson; sisters: Rachelle and Makayla Johnson; brother, Ramon Johnson; maternal grandmother, Shirley Johnson (Floyd); aunt, Cassandra Johnson; three nieces, four nephews, several cousins and a host of other loving family and friends.

The family of Malcolm Del'Von Johnson created this Life Tributes page to make it easy to share your memories.

Send flowers to the Johnson family.