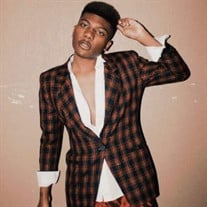 Manaliki’ Eugene Wilson, age 27, was born on October 8, 1994 in Kansas City, MO to Rohan Wilson and Jennifer Strong. He was his parent’s youngest child. He was proceeded in death by his grandparents, Melvin and Bertha Strong and a cousin, Laurence McCauley. Manaliki’ attended school in the Grandview School District located in Grandview, MO. He later left to Dallas, Tx where he begins his journey of exploring many different types of jobs from high end fashion, photography to hospitality, which all groomed him into the beautiful free-spirited soul that he was. Manaliki’ loved spending time with family and friends, he loved taking pictures, he loved the museum, he loved a good time, which means he was the life of the party. During his time in Dallas, Manaliki’ met many friends who became his second family, who loved him dearly. He departed this life on March 17, 2022 in Dallas, Tx. Manaliki’ leaves to cherish his memory: his grandparents, Eugene & Barbara Wilson; mother, Jennifer Strong and his father, Rohan Wilson; his uncles: Chris Wilson, Steven Wilson, Melvin Strong, David Strong, Mack Shelby, Douglas McCauley and Christopher Montgomery; his aunt: Shannon Williams, Velda White, Pamela McCauley and Monnika McCauley; his sister, Asia Golden; his brother, Malachi Wilson; his niece, A’siyah Strickland; his nephew, Isaiah Jones; His god siblings: Camela and Clifford Jones; his bonus brothers: Devon, Howard and Nick; his bonus sisters: Chelsey & Escada; as well as several cousins and a host of other loving family and friends.

Manaliki&#8217; Eugene Wilson, age 27, was born on October 8, 1994 in Kansas City, MO to Rohan Wilson and Jennifer Strong. He was his parent&#8217;s youngest child. He was proceeded in death by his grandparents, Melvin and Bertha Strong and... View Obituary & Service Information

The family of Manalik'i Eugene Wilson created this Life Tributes page to make it easy to share your memories.

Send flowers to the Wilson family.