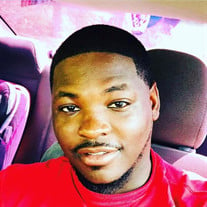 Michael Londell Williams, 33, son of Roxann and Wardell Williams. At the age of four, his mother preceded him in death and he was raised by his Auntie Mom, Antoinette Boswell. He was a resident of Kansas City, Missouri. Growing up, Michael was a member of the Boy Scouts and attended Grandview High school. After high school, Michael was a hard worker. His latest career path led him to become a logistics manager at Capstone. He gave his life to Christ and was baptized at an early age. Michael grew up attending Word of Life Worship Center, where he was a junior usher and attended Sunday school faithfully. Michael was a charismatic and funny person, turning a weird situation into a funny moment in an instant. Michael was also a giving person. He would give his last dime to the ones he loved. Michael was not only a father of Jai’vi’ion, Tanira, Michael Jr., Makel, Maliah. He was also a father to Jyree McDaniel. As a dedicated father, he loved his children very very much! Michael departed this life, October 25, 2021 to be with his Heavenly Father, Jesus Christ. He was preceded in death by both of his parents and his brother Ricky Boswell. Michael leaves behind to cherish with fond memories, his loving Auntie Mom Antoinette Boswell of Raymore; five children, Jai’vi’ion Griffin (Shatoya), Tanira Williams (Tamira), Michael Williams, Jr. & Makel Williams (Jileesa), Maliah Williams (Shelby); siblings, Damion Boswell, Scott Boswell, Donisha Gordon (Zelverick), Calvin Boswell, Wardell Williams Jr., LaToya Fisher (Andrew) and Chasi Sipple; nieces and nephews, Dorion Boswell, Simone Boswell, Prophet Boswell, Justin Roland, Josiah Roland, Justice Roland, Scott Boswell Jr., Ayya Boswell, Aidin-Ozias Boswell, Isabella & Annalise Gordon, Lailah Estis, Nickolai & Cree Bell, uncles, aunts, great-nieces and nephews and many other relatives and very close friends.

Michael Londell Williams, 33, son of Roxann and Wardell Williams. At the age of four, his mother preceded him in death and he was raised by his Auntie Mom, Antoinette Boswell. He was a resident of Kansas City, Missouri. Growing up, Michael... View Obituary & Service Information

The family of Michael Londell Williams created this Life Tributes page to make it easy to share your memories.

Send flowers to the Williams family.