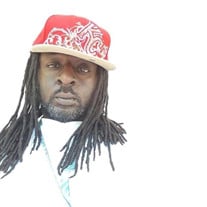 Naaman Enoch Williams March 3, 1975 - December 27, 2021 Naaman Enoch Williams, 46, was born March 3, 1975 to Jeanice E. Williams and Frank E. Johnson. Naaman is preceded in death by his father; his grandparents, Rev. John and Myrtle Williams and Herbert and Nevada Johnson; also, one child preceded him in death. Naaman was educated in the Kansas City School District, graduating from Van Horn High School, Independence, MO. After high school, he attended Penn Valley Community College; he was always trying to further his education as much as he could. Naaman, affectionately known as “Slimm” & “Black”, was a hard worker, he worked various jobs as well as rehabbed and remodeled homes for many years. He was always working on his cars, a true mechanic at heart. But Naaman's first passions were rapping and getting on that grill "Mr. Barbecue Man" with his special barbecue sauce "Blacks World Class Gourmet Barbecue Sauce" KC Finest better than the rest! And he meant what he said, you were NOT getting that recipe! Lol. Besides the love for those things, he loved all his children, grandchildren, family and friends. Naaman accepted Jesus Christ at an early age; as he got older, he found his way to Black Hebrew Israelites. Naaman Enoch Williams departed this life and went home on December 27th, 2021 in Kansas City, Missouri. Naaman leaves to cherish his memories: his mother, Jeanice Williams; his sons: Naaman Williams and his mom Athena, Jay'Lin Williams, and Juan Cole; his daughters: Gabrielle Mosby and Jania Cole Williams; his brothers: Daryl Jones, Shawn Williams, and Jason Gray; his sisters; Essence Thompson, NaTasha Williams, and Jasha Gray; Paw-paw’s baby, La'Niya Lanae Williams; his Uncle Lewis; his aunts: Barbara Slaughter and Vanessa Guy; one special friend, Tyvette Gaines; a host of nieces, nephews, cousins other loving family and friends.

The family of Naaman Enoch Williams created this Life Tributes page to make it easy to share your memories.

Send flowers to the Williams family.