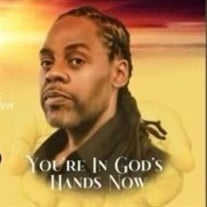 LIFE REFLECTIONS Sunrise: July 24,1964 Sunset: July 20, 2021 Known as: Ronald Anderson Jackson AKA Raymond/Ray-Ray Ronald Anderson Jackson was born July 24,1964 in Malden, Missouri to the union of Jonathan Jackson and Dorothy Mayweathers. He was the fifth of six children. Mr. Jackson attended Central high school in the KC school district, joining the army after graduating. He was a valued employee for Home Depot for several years. Ray/Ronald/Raymond enjoyed traveling, being around family and his children which were his joy. He would constantly brag of his daughter joining the marines and his son being a young Entrepreneur of owning his own business. When you saw Raymond, he had an abundance of knowledge to give, and would not let you leave without letting you know that he loved you. He was sometimes hard headed but more than loveable person. Anyone that knew him knows he wasn't afraid to express himself he loved to dress and had expensive taste. He went through ups and downs in life just like anyone else - but never allowed it to hold him back in his journey. To know him was a blessing. Raymond was preceded in death by his Grandparents, his Mother, and Rhnea Smith a (twin to his daughter), and three brothers Franklin Jackson, Eugene Mayweathers and Jodie Silas. Raymond leaves to cherish his memories - but not to be forgotten his father Jonathan Jackson his children; Aalim Thornton-Jackson and Rhonisha Smith, 3 sisters; Brenda Jackson-Lamb, Kathy Hunt, and Stacey Fields, 3 brothers Terry Jackson, Thomas Jackson, Kamarko Silas. His nephews which he had special relationship with, Marshall, James, and Jarrett Jackson, along with a host of nephews, nieces, relatives and friends.

The family of Ronald "Raymond/Ray-Ray" Anderson Jackson created this Life Tributes page to make it easy to share your memories.

Send flowers to the Jackson family.