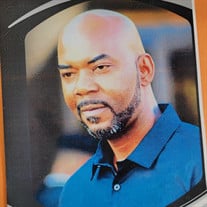 Shawn M. Thompson was born November 01, 1971, to Debra Thompson & Cordell Wilson (proceeds him in death) in Kansas City, MO. James Osborn entered hi s life as a father figure during his childhood. Shawn went to Melcher Elementary School, Nowlin Middle School and graduated at Van Horn High School in 1989. Shawn enjoyed sports of all kinds, mainly boxing, football, and basketball. He had many hidden talents only shared with family such as, drawing, poetry and short story writing. Shawn was known as a serious cat, no room for small talk, only conversations full of substance. His love for his family was second to none. Nothing could come between the strong bond he had with his children. He began his job career at Dana Incorporated where he worked as a Team Lead and moved on to Polytainers Inc for over 18 years, where he was awarded Employee of the Month in June 2021. Shawn began a childhood friendship with Yolanda Charles in 1986. The two later married June 23, 2001. From that point on, she was always his “Peppermint Patty” aka “Chuck” and he was her “Charlie Brown”. Proceeding him in death were his grandmother s, Christine Bush & Bonnie Wilson -Bradley and grandfather, Richard Wilson. He was survived by his wife, Yolanda “Lonnie” Thompson, children, LaQuan Thompson (Riva Thompson), Shaunna Thompson (Tonya), Alaina Webb (Julia), Shawn Thompson Jr. & Shari Thompson. Shawn had 6 grandchildren, Brandon Jr. , Br Alyen, Kelise, Alyssa, Amir & Zola. He also leaves behind his grandfather, Thomas Bush, 2 sisters & 2 brothers: Tina Thompson, Tanisha Osborn, Eric Osborn & James Osborn Jr. and a host of Aunts, Uncles, Niece’s, Nephews, Cousins and many other family and friends.

The family of Shawn M Thompson created this Life Tributes page to make it easy to share your memories.

Send flowers to the Thompson family.