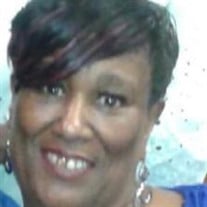 Sherry was born on May 27, 1947, in Kansas City, Missouri to her parents Hazel Biggins Walker and Johnnie Walker Sr. who also preceded her in death. She was also preceded in death by her beloved son Darryl Rogers Sr, grandson Darryl Rogers Jr, brothers Roy Rodriquez, Cortez Rodriquez, Michael Walker, and sister Sylvia Walker Woods. Sherry was married on June 7, 2003, to Steven Luster. They were married for 18 years. Sherry was his queen, they could beat anyone at any board game. Sherry graduated from Central High School. She worked for the Durham and Laidlaw Bus company as a monitor for many years she loved the kids that rode on her bus. Her favorite verse in the bible was Psalms 23:1. Sherry had an outgoing personality who enjoyed having fun with friends and family. She would bring everyone together with her cooking for any events at their home. She was very adventurous from going on road trips to the lakes, and she really enjoyed fishing. She was one of the bravest people you could ever meet for standing up to things she believes deeply that made her an independent woman that many people looked up too and wanted to be like her. Sherry loved her music and listening to her husband sing to her. Sherry passed away on July 14, 2021, in her home peacefully while sleeping surrounded by close loved ones. She leaves to cherish her memory; husband Steven Luster; Son Tony Rogers Sr (Alpha) ; Daughters LaTonya Rogers, CaTina White (Derrick); Brother Johnnie Walker (Beverly); Sisters Marquita Mclntosh, Hazel Boyd (Frankie Boyd), Audrea Pennington( Gene), Mornette Walker, Gail Nyabally (Ibrattim) and Sharon Winn all of Kansas City, MO ; grandchildren Sherry Young(Marty), Eugene Rogers, Conswaylo Ross(Montell), Tony Rogers Jr, Tyran Rogers, Shannon Kearney (Jimmy), Bruce Clardy, Shameka Moore, Terrion Willingham, Kalika Willingham, Jo’Wan Banks. A host of great-grandchildren, nephews, nieces, cousins, other relatives, and friends.

The family of Sherry Lee Luster created this Life Tributes page to make it easy to share your memories.

Send flowers to the Luster family.