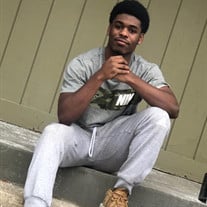 Celebrating The Life Teron Winters May 11, 2002 – November 12, 2021 Teron Winters, age 19, was born on May, 11, 2002 in Kansas City, Missouri to the parents of, Mark Reese Winters Sr. and Talisa Marie (Johnson) Winters. He was preceded in death by his great grandmothers: Mary Jane Emory, Geneva Johnson and Barbara Johnson; great grandfather, Roosevelt Johnson; step grandfather, Saul Rick; his great uncles: Jimmy, Robert, and Michael Emory. Teron Winters was educated at Liberty High School, Liberty Missouri. Teron had a very ambitious passion for track and field since his youthful years where he dominated in the 100m and 200m dash bringing home medals after every meet. When he got older, he continued pursuing his passion for Track & Field in Liberty High School where he made it all the way to State Championships in the 100m, 200m, and 4x100m relay. He had natural jets! Teron was not only quick and nimble he was also a beast on the field when it came to football where he played as a running back since his youth. When it came to his loved ones, Teron was known for being a loyal, genuine, & real individual who sought to put The Most High and his family first. Back at home, Teron had a warrior-like mentality and protected his mom and his grandma like a shepherd watching his flock. He was a soldier. He admired his three older brothers and gleaned from them. They were a unit built upon unbreakable bonds. This love that Teron had for his family was no different when it came to his little brother Tamarion whom he sought to be a bigger brother to, a real role model. At a young age Teron was a head strong, driven young man who sought to be a light to others. He was a selfless young man who helped bring the Truth to his close friends who he was like a brother too. He had the biggest smile that would warm the hearts of all around him. Teron Winters was employed at Forward Living Home Healthcare working with individuals with diverse disabilities. When it comes to faith, Teron was an active believer of his true heritage, a Hebrew Israelite from the tribe of Judah. Teron stood on what he believed in making Truth music and enlightening his friends along the way. He was dedicated to serving The Most High God and from a young age was striving to change his life as well as others. He crossed over to paradise on November 12, 2021 at his residence in Liberty Missouri. Teron leaves to honor his memory: his father, Mark Reese Winters, Sr., his mother, Talisa Marie Winters; his four brothers: Martese Jamon Johnson Winters, Markese Damon Winters, Mark Reese Winters, Jr., & Tamarion Isaiah Johnson Winters; his niece, Enaya Grace Winters; his grandmothers: Delores Jean Hughes and Claretha Higgins; special cousin, Jeremiah Johnson; special friends: Micah and Jose; several uncles and aunts, cousins and other loving family and friends.

The family of Teron Montreal Winters created this Life Tributes page to make it easy to share your memories.

Send flowers to the Winters family.