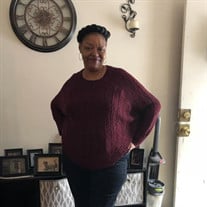 Wanda Faye Phillips-Randle, 62, was born December 24, 1959, in Mount Holly, Arkansas; the middle child of three children to Melvin and Earline L. (Gray) Phillips. She is preceded in death by her parents; her brother, Thomas Phillips and daughter, Johonna Oliver. Wanda attended primary school at Wendell Phillips and graduated in 1978 from Lincoln High School in Kansas City, MO. As a child, she attended New Hope Baptist Church of Mount Holly, Arkansas and was baptized at Paseo Baptist Church in Kansas City, Missouri. Although she did not have a church home in her adult years, make no mistake that, she was a devout Christian and made sure her children attended church faithfully. Later she met and married Otis Randle in 2004. Their union lasted for 18 years until she passed away. Although she enjoyed crossroad puzzles, watching Westerns, game shows, and Lifetime Movies, her favorite pastimes were listening to good music; specifically, Betty Wright, dancing, and spending time with her family. She loved to cook and was a staple in the kitchen on holidays, celebrations, and the family barbeques. Wanda prided herself in providing hospitality for a number of work settings: schools, office buildings, hotels, and hospitals. In addition to being a fearless woman, she was well loved amongst her family, friends, and co-workers. She was known for her frequent calls to out-of-town family and friends, bragging on her kids, and most of all her cleanliness which came with “white-glove” approval. She departed this life and received her wings on May 21, 2022, surrounded by family. Left to cherish Wanda’s memory: her husband, Otis Randle; brother, Frederick Phillips (Lawanna), of Kansas City, Missouri; nine children: Willie Jones (Talishia), of Dallas, Texas, Kristen Jones, Wanda Jones, Carrie Beasley, Tamika Nolen (Wesley), John Oliver, Cherise Phillips, Tyesha Randle, and Natasha Clemons (Eugene), all of Kansas City, Missouri. Also, she leaves twelve grandchildren; one great- granddaughter; several nieces and nephews and a host of other loving family and friends.

Wanda Faye Phillips-Randle, 62, was born December 24, 1959, in Mount Holly, Arkansas; the middle child of three children to Melvin and Earline L. (Gray) Phillips. She is preceded in death by her parents; her brother, Thomas Phillips and daughter,... View Obituary & Service Information

The family of Wanda Faye Phillips created this Life Tributes page to make it easy to share your memories.

Send flowers to the Phillips family.